You’ve entered SPFBO this year with your book Hall of Bones — who do you think your target audience is, and what would be your elevator pitch?

I’d describe Hall of Bones as Vikings meets Game of Thrones.  However, the tone and style owes a lot to Robin Hobb’s Assassin’s Apprentice and The Farseer Trilogy, with some Grimdark elements thrown in for good measure.  It’s the first book in a four part series called The Brotherhood of the Eagle.

So I guess my target audience is people who like those books and/or TV shows.

If you’ve read entries from the last few SPFBO’s were there any you particularly enjoyed?

My favourite fantasy read so far this year has been We Men of Ash and Shadow by HL Tinsley, which recently made the finals of this year’s contest.  Is a great book with a strong author voice, brilliant characters and the plot really keeps you on your toes.

Children by Bjørn Larssen is an interesting entry and we’ve ended up in the same blog group for SPFBO7, so we’re going head to head there.  It’s pitched as a retelling of Norse myth, although Larssen’s story is more about what takes place between the well-known events of those myths.  He uses side-characters rather than the main players/gods to great effect, although it isn’t always a comfortable story to read.  We go to some dark places in Children, although Larssen lightens this with humour and his writing is excellent throughout.  This is one of my dark horses for SPFBO, so watch this space.

I also enjoyed PL Stuart’s A Drowned Kingdom.  He does something different with epic fantasy and his choice of viewpoint character in Prince Othrun is inspired.  Othrun is both the protagonist and the antagonist of his own story.  He’s an unlikeable character but Stuart still makes him interesting, which allows him to explore some complex themes and issues.  With its amazing world building and great action scenes, I think this was one of the more underrated entries and deserved wider attention than it’s received.

Going back a few years, Jacob Sannox is a double SPFBO semi-finalist and I’ve read his 2018 entry, Dark Oak.  This book has a great premise, since Dark Oak begins with the fall of the Dark Lord and the action is propelled by all the grey moral choices that follow once the archetypal evil enemy has been defeated.  I thought I knew exactly where the story was going, only for Sannox to confound me at every turn.  The final quarter really blew my mind – Dark Oak is an astonishingly creative debut and Sannox has been turning out good books ever since.

Finally, I’m hearing lots of good things about Legacy of the Brightwash by Krystle Matar, another entrant for SPFBO7 who’s just made the semi-finals!  I’ve not read this one yet but people I know who have are all raving about it.  It’ll be my next read, just as soon as I’ve finished Mother of Eden by Chris Beckett.  I’m a slow reader, which is a distinct disadvantage in a competition of SPFBO’s scale!

It says you’re repped by John Jarrold, that must be exciting, when did that happen?

Yes, I’m very fortunate to have John as my agent.  What he doesn’t know about the fantasy literary scene isn’t worth knowing!  John became my agent at the end of 2015 and we’ve worked together ever since.  He provides editorial input for my books as well as more general advice and guidance.  Although I’m independently publishing The Brotherhood of the Eagle series, I’m still interested in the traditional publishing route for my other books.  Currently, we’re out to publisher submission with a book called A Quiet Vengeance.  At this stage in my career, that would make me an aspiring hybrid author.

You like Becky Chambers books — are there other slice of life authors you enjoy?

I loved The Long Way to a Small Angry Planet but that’s a fairly unusual book for me.  Normally, I prefer more action or plot driven stories.  Probably the closest thing, and this is going back a long way now to the 1990s, would be Bridget Jones’ Diary by Helen Fielding.  I remember that when it was still a newspaper column and there were times when I wondered whether the events being portrayed were actually real or not.

I credit Bridget Jones’ Diary for instilling me with a regular writing habit.  I began my own (much less interesting) diary, which I kept for several years.  Later, I made the switch and began writing novels, which ultimately led to me completing Hall of Bones.

That particular view is looking out from Win Hill towards Lose Hill in the Derbyshire Peak District, which is part of the Great Ridge route that includes the more well-known Mam Tor, just outside Castleton.  I enjoy walking and I’m incredibly lucky to have the Peak District on my doorstep.  That whole area has so much to offer and although I’ve lived in Derbyshire for 15 years I’m still discovering new routes and places to explore. 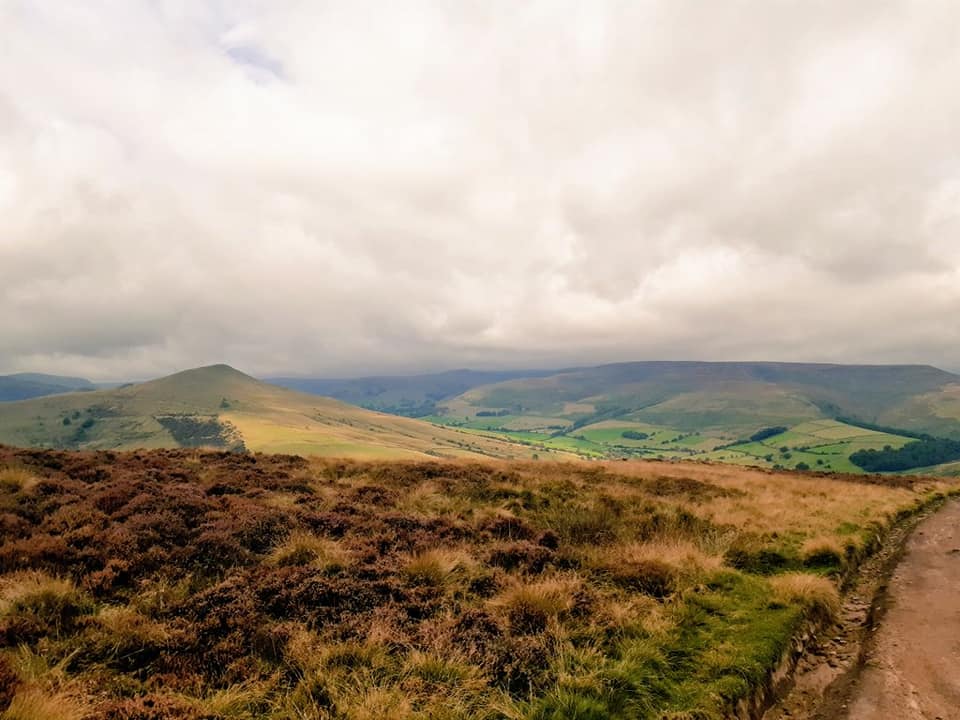 That’s gorgeous, was that a vacation or are you lucky enough to live there? 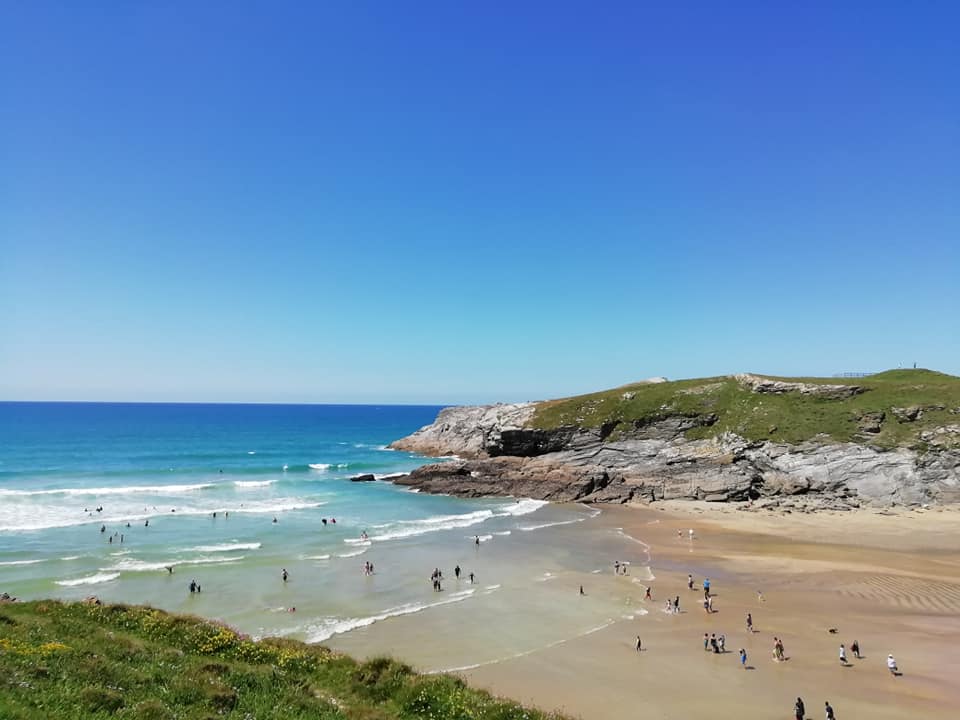 This is a picture of Porth Beach in Newquay in Cornwall from our family holiday earlier this summer.  It was a fantastic spot and that whole northern Cornish coast is full of incredible beaches and spectacular views.  Definitely one of the best holidays we’ve had for a long time.

You post a lot of pictures of beer.  What kind of beer do you prefer and is there a brand you’re loyal to?

I love the fact there are so many varieties of beer – my mission in life is to try them all.  In my home town we have a specialist craft beer shop that has suppliers from the various micro breweries in Sheffield and Derbyshire as well as further afield.  I enjoy pretty much anything from pale ale, through to bitter and stout.  The Abbeydale, Bradfield, Eyam and Cloudwater breweries all produce great stuff.  I wouldn’t say I’m loyal only to one brand as I like to try different things but if I was to highlight a current favourite, it would be The Kernel brewery in London.  They do a lovely pale ale – perfect for the summer.

How did you get into Haggis MacBrawn’s Dishy Secret series?

That’s an interesting question and I’ve included a picture in case people don’t know about this particular book.  Someone recommended Karen McCompostine’s work and once I read it I knew I’d found the perfect romantic shifter novel for me.  I was amazed she’d written something like this, let alone published it.  Her use of Scottish dialect in particular demonstrates a unique approach to language and I can’t think of a comparable writer when it comes to her literary craft.

Not everyone realises Karen McCompostine is a pen name.  As for her real identity?  I’m sworn to secrecy on that one …

Do you have any pets?  Pictures?  Favorite story about them?

We have a cat called Max and a tortoise called Hermione.  Looking after them is a full time job, as these action shots demonstrate.  When he’s not eating or sleeping Max enjoys wildlife documentaries from time to time. 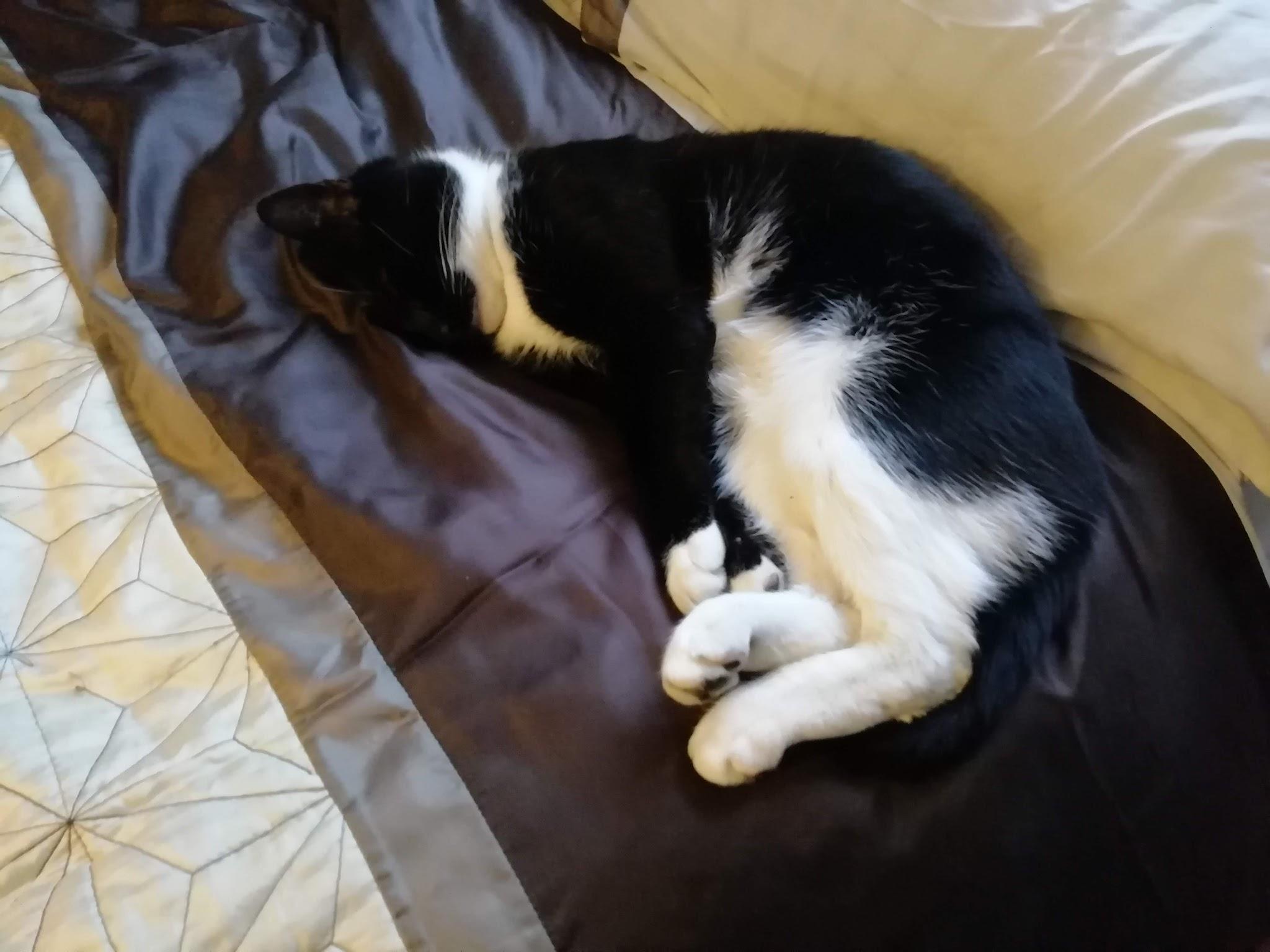 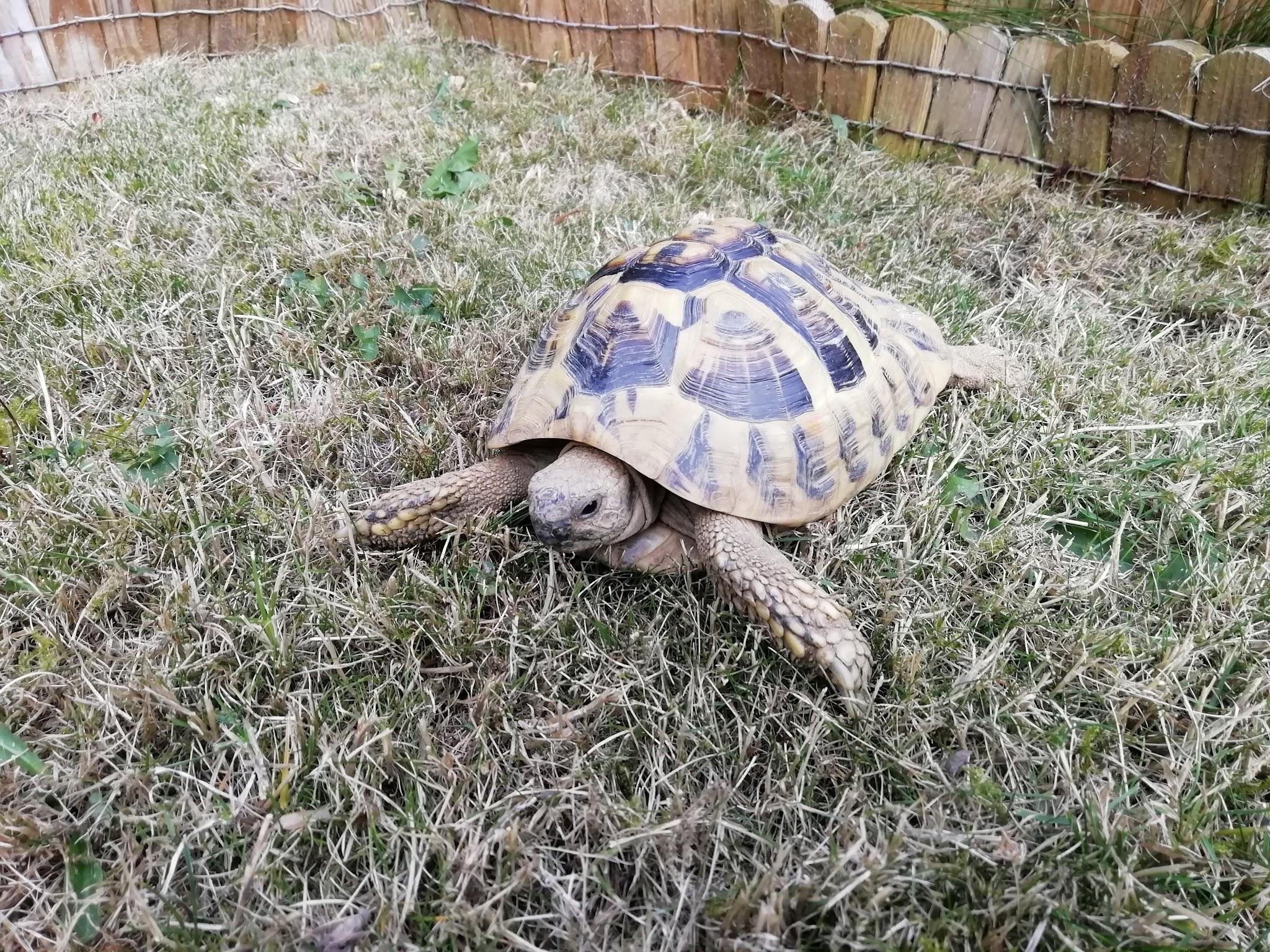 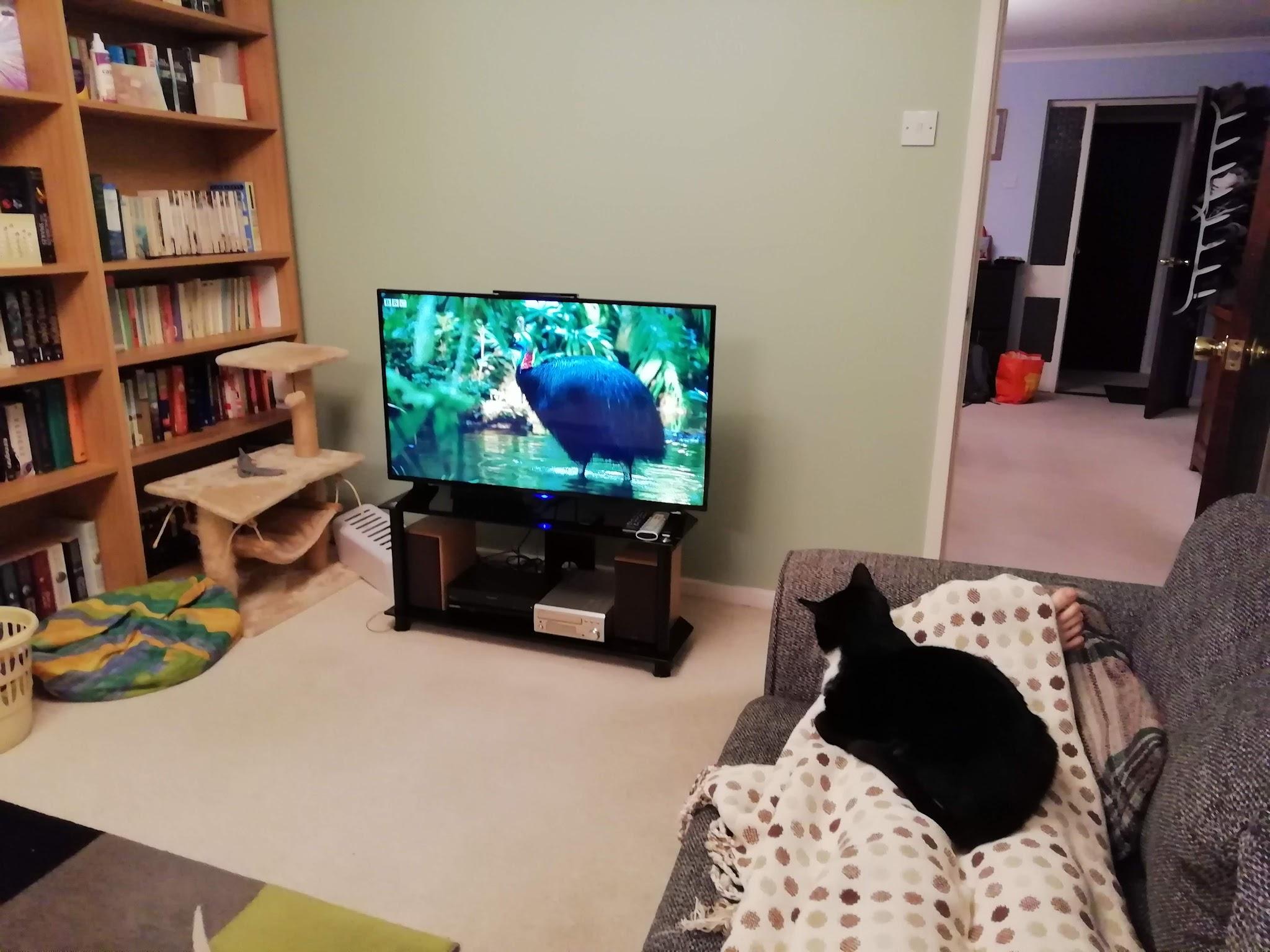 If you had to write a romantic singles ad for your main character, what would it say?

Hmm.  That depends on where you are in the story arc for Hall of Bones.  At the start of the novel, I’d probably go with:

Like your Reavesburg nobles with more brains than brawn?  Do you prefer your men to know the difference between runes and raids?  Second son of the Reavesburg Clan Chief (although the line of succession is always fraught with danger, so who knows what will happen).  GSOH and excellent prospects.  Good personal hygiene a must.

According to your twitters you’re looking forward to the new Sandman netflix series – what’s your favorite Neil Gaiman novel?

In terms of Gaiman’s work, Sandman is my big favourite.  When it comes to his novels, I’d probably go with American Gods.

You’ve RT’d some Pratchett stuff — are you a discworld fan?  Favorite novel?

Terry Pratchett was a really interesting character but I never warmed to the Discworld series.  It’s one of the things I’ve always thought I should get round to reading but never have.  I enjoyed Good Omens, which he wrote with Neil Gaiman back in 1990.  I also read A Slip of the Keyboard, which is an anthology of Pratchett’s non-fiction writing, including pieces about his battle with Alzhiemer’s towards the end of his life.  It’s a great book – interesting, funny, moving and uplifting all at once.

You post a lot of pictures of churches and old architecture, is there one in particular that captures you more than most? 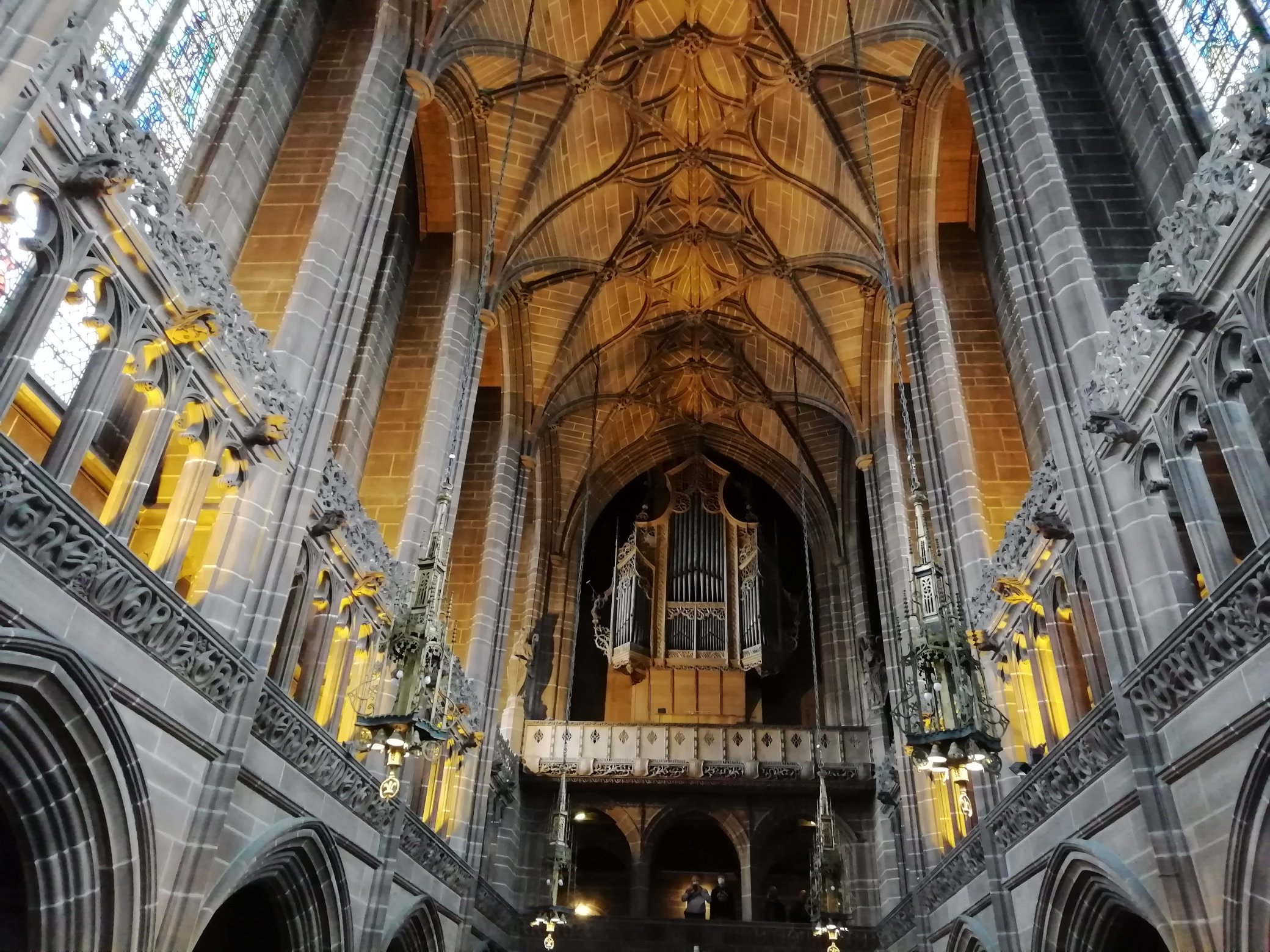 I’m a Christian, so I’m interested in church buildings and the history associated with them.  I also find architecture fascinating (I’m a big fan of shows like Grand Designs) – I love the creative side of how form, design and function can come together.  I keep toying with the idea of building my own house but my wife is firmly against the idea – for a whole host of practical and financial reasons!

In terms of buildings that have stayed with me and left an impact, I’d go with St. Joseph’s Church in the French port of Le Havre.  Rising up out of the ruins of a city left destroyed by World War II, it was constructed in the 1950s both as a memorial for those killed and a statement of hope for the future.  The pictures below give you some sense of the huge scale of this building, built from enormous slabs of concrete and yet still making use of the light to create an open and inspiring space.

I’ll go with the traditional answer here because, as everyone knows, unicorns taste of the thing you fear the most (hence why hunting them is outlawed).  So for me that would be marshmallows.

Thank you for taking the time!!!