I am back with another interview from an SPFBO6 contestant who made it as a semi finalist. Unfortunately I haven’t had a chance to read this one yet, but it’s certainly on my TBR for 2021.

How did you hear about SPFBO? Have you read any of the other entrants?

I can’t remember exactly how I first heard about SPFBO. Somewhere on social media, I think, shortly after I had published CTRA. The only other entrant I’ve read so far was Voice of War by Zack Argyle, which was the finalist pick from Lynn’s blog. It was a great read and very deserving of the finalist spot. I have several other SBFPO entrants on my TBR and hope to read at least a couple of them for Indiecember next month.

Lynn’s review said that this is set in 1920’s America – what made you pick this time and setting, is this era of particular interest to you?

The time period was more of a secondary thing that only came into play after several different iterations of the story. CTRA was first written as a 6,000-word short story, and honestly, I didn’t have a good grasp on the setting myself at that stage. A lot of the beta reader feedback I was getting said the setting was too vague and confusing. I shelved the story for a year or two before deciding to turn it into a novel. After a lot of hair-pulling and doing some research on circuses, I decided on this alternate 1920s world as the time period best suited for the conflicts and magic system I wanted to explore in the story.

Was there anything in particular that made you want to write about a circus in Calico Thunder Rides Again?

The entire writing process for CTRA was very random in some ways. I didn’t set out wanting to write a circus story (and certainly not an entire novel). The initial idea came from one of those story prompt generators you can find online that just mash a bunch of random things together – something about a down-on-his-luck cowboy having a limited amount of time to sell a flying circus. So that’s where the circus came from, and it was only after I started doing more research and looking into other fictional circuses that I became more invested in writing about the circus itself. I think there’s something inherently sort of magical about a circus, but there’s a lot of behind-the-scenes stuff that goes into creating that magic, even in a fantasy world where actual magic exists. I had a lot of fun exploring some of those things in CTRA.

Did you have to do any research to be able to write in this era?

I did do quite a bit of research, but admittedly not as much as your typical historical fiction or historical fantasy writer might do. Researching becomes tedious to me very quickly, so I did what I felt was enough to write the story and make the setting feel authentic while still allowing for some creative liberties related to the fantasy elements of the world. Most of the research I did was on circuses, life in the US during Prohibition, and the subsequent rise of organized crime in the 1920s and 1930s.

Your amazon bio says you grew up with your nose stuck in a book – what were your “gateway” fantasy series that you read while young?

I read a lot of Lloyd Alexander when I was younger. The Chronicles of Prydain and The Iron Ring were especially important to me. I also enjoyed Diana Wynne Jones’ books, particularly the Chrestomanci books and Howl’s Moving Castle. Artemis Fowl and the His Dark Materials series are others that made a strong impression on me.

Your bio also says you have a career in clinical social work – what drove you into that line of work?

I’ve always loved reading and writing, so I originally went to college to be an English teacher. Due to some personal challenges, I dropped out in my second semester and spent the next six years working as a nursing assistant. I loved helping others in that job but always felt like there was more I could do, so when I went back to school, I decided to major in social work. I had plans to work in child and family services after graduation, but during my last semester, my university opened up a 1-year master’s degree program and I figured, why not? There I discovered that I really liked working with people one-on-one as a therapist, so that’s what I do now. I mostly work with children in foster care and adopted out of foster care and their families, so I still get to do a lot of the things that appealed to me about working in child services, but with a therapeutic focus.

What’s the best and hardest part about your job?

If we’re talking about my day job as a therapist, the best part is getting to know the kids I work with and see their resilience. It’s always humbling to see their growth and to be a part of that journey. One of the hardest parts for me is keeping up with my paperwork. I may be a writer, but that doesn’t mean I enjoy writing all those progress notes!

If we’re talking about my job as an indie author, the best part is getting to share my stories with readers. It always brightens my day when someone tells me they enjoyed one of my books. I also really love being a part of the indie author community, which I’ve generally found to be very supportive and encouraging. The hardest part is marketing. I want people to discover and read my books, but it’s hard for me to put myself out there and say, “Hey, look at me! Please buy my book!” I always worry about bothering people or coming across as being too pushy. I do have two daughters. They’re 9 and (almost) 7 and both have very different personalities, which makes for some fun and interesting family dynamics. The oldest wears her heart on her sleeve (like her mom) and is very gentle and a little shy. The youngest is an outgoing little spitfire with a sharp sense of humor. They’re both very creative and I love seeing what their imaginations come up with, especially as someone who so highly values creativity and artistic expression.

You play video games! Which three games have you sunk the most time into?

I love a good story no matter what format it’s told in, so with video games, I’m always pulled in first and foremost by the story and characters. The Last of Us games are my favorite and probably the ones I’ve spent the most time playing, followed closely by the Mass Effect trilogy and Horizon Zero Dawn.

You’ve written quite a few books, do you have a schedule you stick to or does it ebb and flow with inspiration?

It really depends on what else I have going on in my life. I have a lot to balance between writing, my job as a therapist, and being a parent. That balance has been even more difficult this year as we’ve all had to adjust to the pandemic. So my schedule is kind of all over the place, but I do try to set deadlines and goals for myself (i.e. to write so many words in a given month or to have a draft finished by a certain date).

Your FB profile says you live in Utah – where would you recommend people visit if they’re passing through?

I live in the southern part of the state, and there are several national and state parks nearby that are absolutely gorgeous. The weather is great year round so you can visit them anytime. Sand Hollow State Park and Zion National Park are two of my favorites, and I’d definitely recommend checking them out if you’re passing through.

I saw your Twitter post about your WIP, and many of the characters have been drawn – did you draw those? 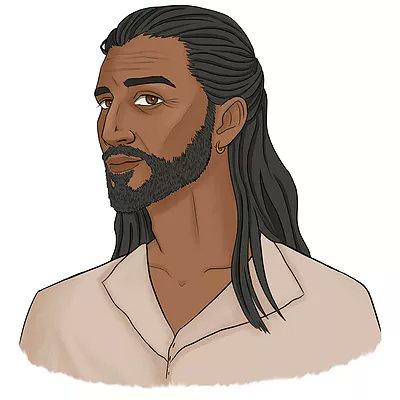 I did draw those, and I actually drew the dragon on the cover of CTRA as well. Art is often a key part of my creative process when I’m working on a story. I like to draw my characters, and that can sometimes help me visualize their mannerisms, facial expressions, clothing etc. When I’m feeling stuck with my writing or just need a break from a story, you can often find me working on various art projects.