From what I understand, your day job is an “ever changing parade of ambulance companies”. What’s the biggest load of horseshit that you have to deal with that most people wouldn’t think about?

I don’t mind the hours, I don’t mind the gore or the death or the other things that people think of as the  stressful part of the job. The industry is soul crushing. EMTs and medics are kinda treated like we’re disposable. The pay is low, like just above minimum, and the job requires a lot of certifications to maintain. A lot of people use it as a stepping stone to a Fire Department, or Police, or nursing or to get some patient contact before going to Physician Assistant school, so it’s a transient workforce.

The owners take advantage of that to pay lousy, keep benefits low, not really contribute to a retirement fund, since they don’t expect people to stay long. All this conspires to make the EMS lifer an overlooked, underpaid cog in a very necessary machine.

I love the actual job. I get frustrated by the companies. Hence the “ever changing” part.

It looks like you’re into fencing and swords n stuff – when did that interest start?

I’ve always been interested in swords. When I was a little kid I’d play Robin Hood  and KIng Arthur and so on. My parents raised me on the old black and white Errol Flynn swashbuckling movies, so I always wanted to fight duels on staircases.

I started fencing for real in college. I was on the UNH team and I was pretty good. I had a national rating in saber fencing back in the day, and I can hold my own with a foil. It’s fun and great exercise, but at the end of the day, it’s kinda playing tag with a car antenna and pretty removed from an actual swordfight. In the late 80s, however, it was the closest to swordfighting I could get.

Later, I got into HEMA, which is Historical European Martial Arts, which uses heavier, more realistic swords and more protective gear, and tries to recreate historical techniques. It’s a blast. I wish it had been more widespread back before my arthritis kicked in. I still do it, I just walk reeeeeeaaaally slow the next day. Now that translation of medieval and Renaissance manuals are widely available thanks to the internet connecting various scholars and enthusiasts, we’re seeing a resurgence in historical swordplay. 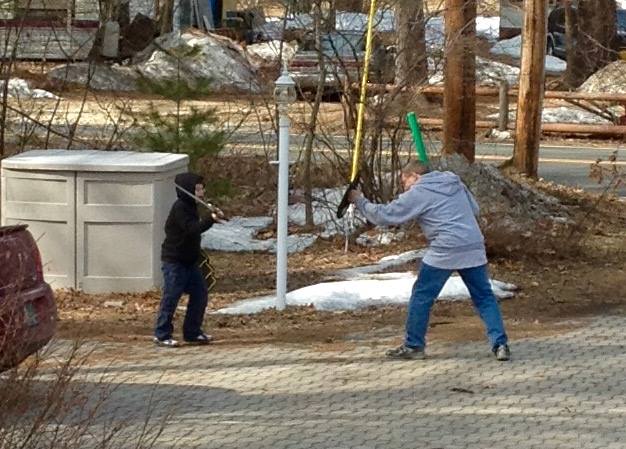 You’ve got lots of pictures of whisky – what’s your favorite? Do you take it neat or on the rocks?

I like a wide variety. I like a good single malt Scotch for special occasions, I like Jameson’s Irish whiskey for everyday, I like bourbon for a mellow visit, sitting on the porch and telling stories, When I want the nice burn but to concentrate on the conversation, not the subtleties of the booze.

You were pictured reading at a winery – reading what, and do you like wine?

I read a very short story, “The Muse’s Lament,” where a writer’s inspiration regrets being left for a new flame, then we find out it’s from the perspective of an empty whisky bottle
Hmmmm….I may have an issue here. And yes, I do enjoy wine. I don’t really know wine. I can speak intelligently about beer and whisky, but not wine. I know I like a big, full bodied red, but I don’t have a sophisticated wine pallet.

If your life had a theme song what would it be?

Picking just one is tough. My 2020 theme song is “Take Back the Power” by the Interrupters.  My wife and I have always had Modern English’s “I’ll Melt With You” as our song because we’re old but still in love. When I was poor and directionless, I thought my life was a Springsteen song.

To pick just one for my life as a whole, it would have to be “I See” by Letters to Cleo.

Favorite book would be Going Postal by Terry Pratchett. Movie, I have to go with Blazing Saddles, which is about the best take on racism ever, delivered with a brutality that you can only get away with in a comedy, and for TV it would have to be Scrubs. There is no better medical show. Nothing captures the feel of a hospital or the lives of healthcare workers better, even though it is half absurdist comedy. Compared to Scrubs, other medical shows just can’t hold a candle. Grey’s Anatomy is a soap opera in a hospital, House is just Sherlock Holmes in a hospital, (and literally everyone is an awful human being), ER was good for a few years until it decided to jump the shark around the second helicopter crash. Scrubs is just the day to day grind of healthcare, and the way the broken people who are healthcare professionals cope with the grind. No manufactured melodrama, no glass truck crashing into a busload of hemophiliacs during an earthquake.

I think the best comedy takes a real issue and shows it to us through a filter that allows us to see just how ridiculous it is. That’s why Sam Vimes’ “Boots” theory of economic unfairness does a better job highlighting the rich and poor divide than Jean Valjean being imprisoned for stealing a loaf of bread. That’s why a show like BoJack Horseman can be a truly dark look at depression, because it’s wrapped up in an absurdist comedy. And because I have a total man-crush on Will Arnett.

Looks like you enjoy trivia – give me some facts that will fascinate me for 20 seconds and then I’ll forget. What’s your trivia team name if you have one?

When I was very young, I had an obsession with the names of famous historical figures horses. Which my poor sainted mother had to find out in the days before the internet. A few examples are : Alexander the Great’s horse was Bucephalus, Paul Revere’s ride was completed atop Brown Beauty, Robert E Lee’s horse was named Traveller, Ulysses S Grant’s was named Cincinnati. The only survivor of Custer’s force at Little Bighorn was a horse named Comanche.

The oldest food regulation in the world was the Beer Purity Law in the German states of the Holy Roman Empire, the Rheinheitsgebot, had to be amended because it didn;t originally allow for yeast (which is essential to making beer) because people were unaware of its existence and it was originally just wild yeast from the environment that got into the brew by chance.

I’m a lot of fun at parties.

You were a marine – for how long, watcha do, any interesting stories there?

I had a very undistinguished career. I was in for six years, but I managed to pick probably the only six years out of the last fifty where we were more or less at peace. Enlisted after Beirut, out before Kuwait.

I was an Assaultman. Which is a poorly understood specialty in the infantry. We did a little demolition, and used shoulder fired anti armor weapons, the Dragon in my day, not sure what they use now. Whatever the latest descendant of the bazooka is. Usually we’d be attached to a regular rifle platoon to provide anti armor capability or to help breach obstacles. A lot of the time Assaultmen just get used as extra riflemen or machine gunners, because modern conflicts tend to have a lot of small unit actions, not so much fighting tanks and breaching Hitler’s Atlantic Wall.

But they tend to get a lot of independent initiative, since you’re an attached expert, and the infiltration and breaching guy. It’s like being the Rogue in a D&D party.

Sadly, I hear that the MOS is being eliminated.

You have a history degree – what’s your favorite topic, what’s a weird historical fact?

I really enjoyed the history of Ireland, since it was glossed over in high school. And it has a deep and fascinating history, and I’m surprised it’s so under taught in the US considering how many Irish people came here. If you want to learn a fascinating story about Irish in America that you never hear in school because it doesn’t fit the narrative, Google the San Patricio Battalion.

My favorite obscure fact is that Massachusetts was settled because of a beer run. The crew of the Mayflower were supposed to bring the Pilgrims to Jamestown, but got blown off course and landed in Mass. They didn’t have enough beer to make the trip to Jamestown and back to Europe, so they ust more or less left the Pilgrims to fend for themselves.

I make a mean red sauce. If I want to impress, I’ll do ziti in a marinara sauce with Italian sausages.

A co-worker once proposed to me after eating my beef stew. True story. I turned around from the sink and she was on one knee holding up her engagement ring.  There are pictures. And since my wife is the best woman in the world, she just thought it was funny.

Is there a topic you could give an impromptu half hour TED talk about?

As you might have gathered from this interview, I can ramble on for half an hour about anything.

I’d love to talk about the US healthcare system and contrast it to the rest of the Goddam civilized world and how we could improve things.

If someone stopped by your neck of the woods what would you tell them to check out?

Wow. Depends what they’re in to.

New Hampshire has some of the most beautiful natural  terrain in the world. I’d recommend the White Mountain National Forest. Boston is a 40 minute drive south, and I specifically recommend the Museum of Science and the New England Aquarium. Pre-COVID I could point out a bunch of amazing restaurants and tiny music venues.

Do you have any WIPs?

I am writing a prequel to my Space Marine book, but honestly, right now, I can’t see the US as a leader in tech or diplomacy or an upholder of democracy. Maybe I’ll get inspired again in 2021, but the dystopian present has made my dystopian future seem unrealistically optimistic.

I have an idea for a third Immortal Healer novel, so that’s in the stage where I’ve written a few disjointed scenes that will eventually coalesce into something.

And the thing that I am actually making progress on is a totally new story. It’s an alternate history Victorian Steampunk thing with airships. Mostly because I felt like writing it.  I kinda love that era. There was so much technologic and societal change.

Plus, ya know, airships and sword fights. Band of misfits thrown together to save the world. Firefly crossed with Jules Verne.

Your book, Out Of Nowhere placed as a finalist in SPFBO. What was your biggest takeaway from your time in SPFBO or other competitions you’ve entered?

If I had to pick a thing that really stood out, it was stepping outside my bubble. I didn’t really know I had a bubble.

Getting unexpected feedback from readers outside my usual circle made me take a long look at my writing, and I think it was a significant opportunity to grow as a writer. It was kinda brutal, but I think I came out the other end better for the experience.

Maybe some pictures of your pets and kid? 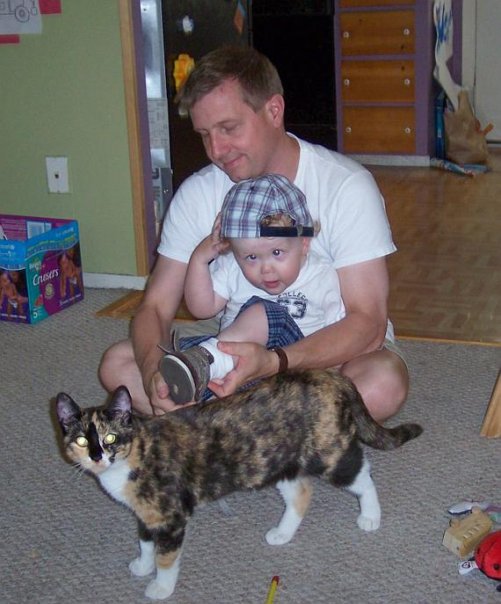 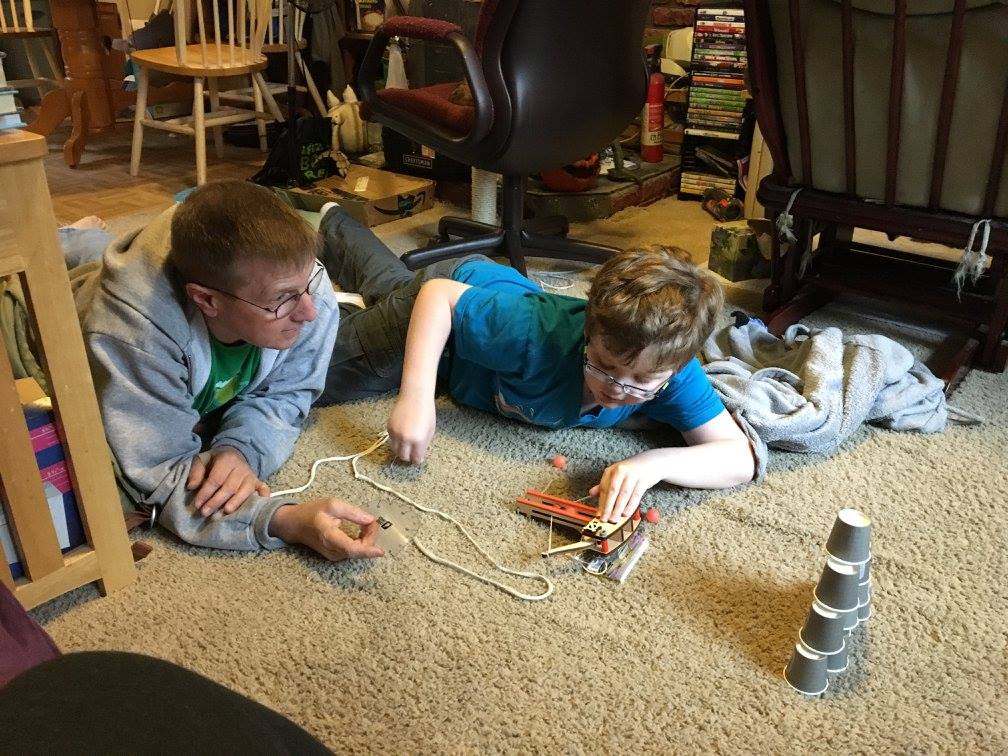 Building a ballista. For science, obviously. 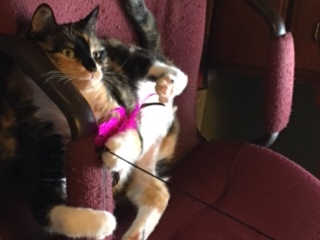 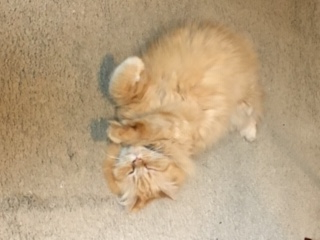 Waffles, AKA Erroll the Swamp Dragon because of the disturbing internal noises he makes. 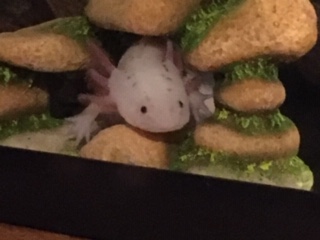